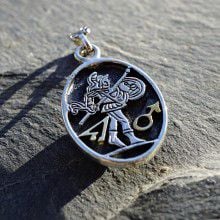 Mars is the planet of raw power, energy and passion

Mars, the red planet of raw power, energy and passion, has recently entered its exaltation sign of Capricorn (late January). This is a once in two years opportunity, to tune in and align with the elevated powers of Mars.

Mars in Capricorn channels his active powers through the prism of this pragmatic earth sign and focuses them with vigour and coherence in practical achievements. Mars in Capricorn climbs the highest picks, not stopping until the goal is reached. It is a powerful testimony in the charts of men/women of action, people that can focus their mind and energy in attaining their desires, without straying or procrastinating. It is a talisman to aim intention like a warrior and be able to conquer it with fearless excellence.

The election time for the talisman features Mars in Capricorn culminating on the midheaven, while his zodiac ruled sign of Aries is rising in the east. Additionally, the Moon at that time is also exalted in the sign of Taurus, applying to a Trine aspect with Mars (Harmonious relationship).

Mars is also conjunct Venus, which is a very passionate and creative combination, and Venus is also one of the triplicity rulers of the earth element. This may balance out some of Mars extremes give further support to beneficial outcomes, and make the martial actions more elegant and attractive.

Talisman Elements
The image at the center of the talisman is the ancient figure of Mars, while the two magic sigils on each side are the "seal of intelligence" of Mars at the bottom left" and the Astrological symbol of Mars at the bottom right. At the back of the talisman, there is a small container with a piece of iron - the metal that is ruled by Mars, and True Cardamom, which is one of the plants ruled by Mars.