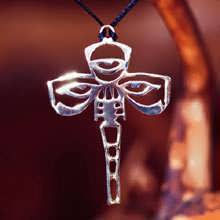 This piece was designed by Milton Thompson and won David's jewelry design contest.

Here is what Milton wrote about the design:
“I designed this as my Egyptian trinity, incorporating the left eye for mind, the right eye for body, and the ankh for spirit in the third eye position. I included a representation of a Died column and three holy conical breads of white powdered gold.”

Eye of Horus
A perfect symbol of knowledge and ancient magic.