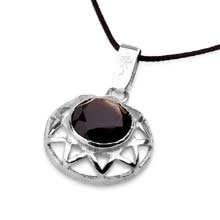 
The Enneagram symbol’s popularity is mostly due to Gurdjieff's use of it to categorize psychological and spiritual human prototypes. However, this symbol was
known since ancient times and is referred to in ancient Kabbalah books.


Three forces of the universe

The Enneagram gives the wearer the true understanding of the three forces of the universe.