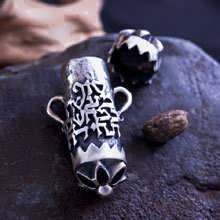 Every action starts with a thought (the seed)

Remind the wearer the power of thought as reality creator