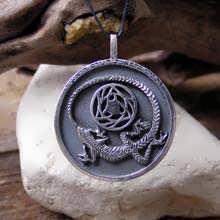 The ability to envision the future is one of the ambitions of humanity from the beginning of history. This desire is found in all human cultures. The use of Tarot cards, Dice throw, I Ching, Astrology, The oracle of Delphi is just a minuscule part of the unnumbered methods that people have used to try and see future events.

The Divination pendant has been created especially to endow you with an understanding of time and the ability to develop divination ability.

What is time?
There are two essential schools related to the concept of time. The first one asserts that time is a part of the structure of the universe itself and it is a dimension within which happenings are continuous. The second school claims that time is actually the way that human consciousness "measures" different happenings which it experiences. Time itself cannot be measured at all. Einstein himself argued that people who move at different speed and relate to an event or a specific continual identical events will experience different time Gaps between the events or even a different chronological order of the events.

The meaning of the pendant
On the upper part of the pendant is engraved the sentence – "Behold the Glory of the first Cause". This sentence is related to the moment of the creation of the universe itself, the moment that contains all the future events themselves. In the center of the pendant appears a version of the Triquetra. A symbol that represents the source out of which "emerge" the events of the past present and future as they exist in human consciousness.

Around the symbol appears the Ouroboros in the form of a Lizard that swallows its tail. This symbol represents the eternal changing of the universe which we in fact experience as time. The reason for using this symbol results from the fact that the ancients saw the lizard dropping its skin or growing its tail anew and saw in this a symbol of eternity and renewal. The Ouroboros symbol is one of my favorite symbols since it represents the entire universe and the world of phenomena that is changing in front of our eyes.

The symbol of the ouroboros, Divination ability and the book of Dune
One of the more interesting places where this symbol appears in its cosmic connection as well; is in the series of the books of Dune by Frank Herbert. The books have deep philosophical meanings. The plot deals in the esoteric levels of the cyclic cosmic and the ability to envision the future. The Ouroboros appears in Dune as an imaginary creature called the sandworm, in the place that rest in the sands of the star Arrakis. From the Sandworm itself, a material is extracted( a drug called "melange" or "the spice" with which one can envision the future. In one of the phases of the plot the Hero who aspires to discover and materialize the purpose of the creation or the goal of creation, unite with the sandworm itself and after his death, the sandworm splits and reverts to being innumerable sandworms wherein each one of them is a splinter of the consciousness of that being.

What Herbert reveals to us is that the entire universe and its primordial consciousness, the first cause that created itself out of itself, that is also expressed in the cyclical phenomenon and the creation anew exists in each one of us as a spark of consciousness or in the words of Herbert, "as a shining pearl". When we exit the state of our self's grasp and dear to look into the great void, we can see all the prophecies, the events and the future possibilities in a clear form. Herbert devoted his book to: "The people whose labors go beyond ideas into the realm of 'real  materials'— to the dry  land ecologists, wherever they may be, in whatever time they work, this effort at prediction is dedicated in humility and admiration"