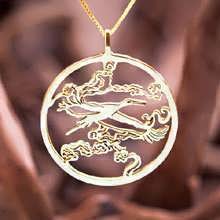 Inspired by the events of returning the Japanese Stork at Toyooka, Japan

Mother Earth is very dear to my heart,
My workshop is located close to the area where I grew up. I have childhood memories of wild expanses of golden sands and pine trees, of walking among wildflowers looking for turtles, toads and lizards. I once kept a turtle I found as a pet. Today in those same fields there are apartment buildings and a monstrous shopping mall and instead of the open wild field with the pine trees, bushes, wildflowers and animals, there is a parking lot sprouting… cars.

All this change took place in only twenty years.

The following moving story inspired me to create the pendant and ring that definitely bring hope and show how paying attention to the environment is the only way we can live on planet Earth.
The story begins in 2004 in the town of Toyooka, Japan. A powerful Typhoon caused flooding of the Maruyama River. At the same time¸ 10-year-old Yuka Okada sat in a shelter with friends from her class and came to the understanding that people are responsible for a large part of the damage to the environment, and not just natural forces.

The way that Yuka decided to make an impact was by bringing back the eastern Japanese stork to the city skies. The stork was common in the past in Japan; however during the 50s and 60s due to extensive use of chemical pesticides in the rice paddies where they fed, they quickly disappeared from the landscape until the very last one disappeared in 1971. Students turned to the Mayor and requested that he allow them land where they could grow chemical and poison-free rice crops in order to bring back the eastern Japanese stork to the city skies. A few years earlier a small breeding center was established to conserve the stork. Due to the fact that the mayor, the students and residents of the town backed the project, large expanses of fields were transitioned back to organic gardening methods.

As a result, the town became a buzzing tourist attraction and the farmers' organic products became a huge success.
When I was a boy I used to watch different animals outside my house and used to feed the turtles who used to live in the backyard. A few days ago I took my young daughter to a local zoo only to realize that the only way for her to see a living turtle is in a cage inside a zoo.


The pendant is a symbol of hope that humankind will find ways to restore harmony and balance to our planet Earth.