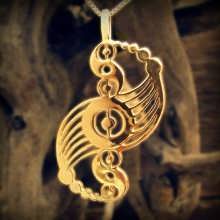 This beautiful formation appeared on Windmill Hill, near Avebury Trusloe, Wiltshire and was reported on 25th May 2009.

The crop circles are a worldwide phenomenon. Some claim it is a man-made art form.
Others claim it is a galactic way of communication and that many of these formations are signs of a change of the human consciousness.

This formation can also be a harmonious symbol of unity and oneness.

It is very interesting to see the tranquilizing effect of this structure. People watching the symbol reported that they experience a sense of musical harmonies upon gazing at it.