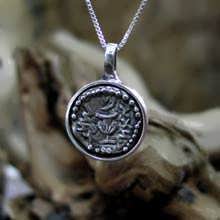 The winds of protest and revolution that are blowing around in the world these days have not passed me over as well. A couple of weeks ago, a friend of the family who is also an antique collector came for a visit to my workshop. He came with a few ancient Jewish coins and asked me if I have an idea for a jewel based on them. I took a few coins from him and told him that I would think about it. After we parted, I looked at one of the coins. On the coin there was blurred, rubbed out writing from two thousand years ago. On one side of the coin there was a motif of a vine leaf with an ancient Hebrew writing, and on the other side there was a sort of jug/amphora also with ancient Hebrew writing.
Out of curiosity, I took a paper and started to decipher what was written. After a few minutes, there appeared on the page two words- "Year two". On the other side was written "Freedom for Zion".
In seconds I understood...

The revolt against the empire broke out because of the cruel oppression and the corruption of the Roman regime, and also due to the division amongst the different sects in the kingdom of Judah. When I looked at the coin I couldn't help thinking about what was happening in different parts of the world; The middle class that in different parts of the world have despaired from the cynical exploitation of the economic bodies and governments. The uprising of the middle class against this continued cynical exploitation around the world will at the end of the day lead to change.
My identification with all those who are fighting against those corporations stems from a clear understanding that has sharpened within me over the years; behind the feeling of freedom that we are given in western countries stands a sort of enslavement of will. The high standard of living relative to previous centuries created a comfortable situation where we have paid our taxes and lived in relative welfare and comfort. The problem started in the last few decades when the masses discovered that they can't afford to purchase a house and have a satisfying lifestyle with their current level of income.
My first understanding started in childhood when I was a student in the "Education System". I didn't understand why the learning material was the same for everybody and consisted mainly of repeating information and suppression of creativity. The constant Mantra of the teachers was: "What will you do without matriculation papers?" That was what was important for the system. Not personal development, original thinking, or creativity, rather a stamp that says you memorized material that for the most part is completely useless for the student. Only after years did I understand that the object of this system is to lead the student at the end of the day to become yet another worker in the organized economic system, another taxpayer giving his hard earned money to the government.