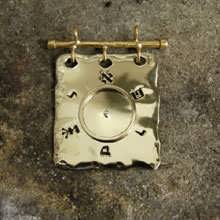 “The one that has no end” or “The infinite”

Expand our consciousness through the unimaginable concept of infinity


This pendant is the ultimate symbol of something that actually cannot be symbolized or described... It is the Ein Sof pendant. Ein Sof is the ancient kabbalah term or concept which literally means “The one that has no end” or “The infinite” or “No End”. The term refers to the undefined source of existence or God. An infinite force which is devoid of any definition and is the source of our finite materialistic universe.

The ancient Pythagoreans believed that nothing can exist without a center and that the existence evolves around the center. The center is the source that cannot be grasped or understood but can spread and become a circle.

The relation of the monad to other numbers can be seen metaphorically - any number when multiplied or divided by one remains the same; So the monad preserves the identity of everything in existence. When the ancient philosophers noticed this they wondered how does how this one/unity state become the many? The answer was "as a reflection" - that is why it is the perfect symbol for pure consciousness existence and creation.

Around this symbol, there is an engraving of the Hebrew word/Kabbalah term - Ein Sof, in the exact Hebrew/Assyrian fonts of the Torah. The shape/structure of these letters reveal philosophical concepts and some of the mystic doctrines of the Kabbalah .

Wearing the pendant is meant to expand  the wearer concsiousness through the contemplation of an unimaginable concept...