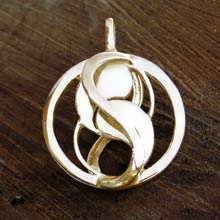 My connection with you brings joy, love, and peace. With you, I can imagine every possibility. We are Entangled…  The entangled pendant is designed by Judy Hilton and Pat Crelly and created by the artist David Weitzman. The following text was written by Pat Crelly to describe the pendant: The Entangled symbol was born out of a deep spiritual connection between two souls who were drawn to one another. Together they found true joy in the essence of life. It was as if the two shared one heart and they had finally come home to rest.  It has been said that we have only one twin soul who is our complementary other half and that our DNA is actually encoded to help us find each other. This union is not about human love or gender; it is about divine love using two human portals to create and spread a vibration of unconditional love. It can occur between parent, child, siblings, friends, lovers, or spirit. This connection surpasses all feelings of fear and separation and is a living example of divine creation expressing itself in complete joy.  This symbol was manifested from a vision and buried within its lines are many treasures. It’s meaning is revealed as each aspect is uncovered. It symbolizes the beauty of oneness and is filled with sacred geometry.  It begins with two yin-yang shapes that represent two souls. One is in the opposite image of the other because they each carry different dominant forces within them. They are overlapping at the center point of their two polar energies and are spinning in opposite directions. The overlapped area forms the shape of a Vesica Piscis and symbolizes a state of fusion.                           The Vesica Piscis is formed by the intersection of two circles or spheres whose centers exactly touch. This symbolic intersection represents the "common ground", "shared vision" or "mutual understanding" between equal individuals. It is the union of heaven and earth and the shape of the human eye. The spiritual significance is of "seeing eye to eye" to the "mirror of the soul". The ratio of the axes of the form is the square root of 3, which alludes to the deepest nature of the triune. It is the crucible of the creating process and an opening to the womb from which all geometric forms are born. It is a symbol of fusion, of opposites, and a passageway through the world’s apparent polarities. It is also the geometric image through which light was born.    The two opposite areas within a yin-yang are known as divine forces and have been described as electric & magnetic, positive & negative, male & female, night & day, etc. The idea is that there is a balance in life and one half cannot exist without the other. The more balanced you are the more complete you will feel. These divine forces have definite charges and are present in all of creation. Supposedly, we each have a dominant force that prevails as we progress toward a non-dualistic or androgynous state of being. If your twin soul’s dominant trait is magnetic then yours will be electric and when you two connect you will feel a completeness that didn’t exist before.  As you can see, within the Entangled symbol there is an electromagnetic wave pattern found in the dividing line that runs from top to bottom between the two divine forces or energies.                   When electric and magnetic energy interact, they propel off each other in a spiral motion. The waves are made up of oscillating or vibrating, electric and magnetic fields that change with certain frequencies. Together they produce waves of energy that create light.  This electromagnetic interaction can be related to the “Trilogy of Life” where the joining of two always creates a third new entity. This is the essence of all creation and the basis of the transformation that takes place when two souls become entangled. There is a new energy or vibration of joy that is felt after the chakra energies of these two souls merge. A double helix is shown to represent a pattern of DNA and the symbol of infinity. The spiral of the double helix creates a vortex of energy or love that crosses over the heart center or zero point of the two entangled souls. The zero point is believed to be the center of the soul or the sacred point of contact where human and divine meet in communion. Now, if you remove the two yin-yang shapes within the outer circle and look at the double helix that remains, you will see the shape of a large yin-yang on the front side and its opposite image on the back. The shape now becomes spherical as if each half is perpendicular and wrapped around the other. This represents the oneness and harmony of their heart connection and the complete balance they bring to each other. Also, as the two souls continue to move toward each other, they become synergetic which means that the whole is greater than the sum of its two individual parts.

Synergy
The final aspect of this symbol is the outer circle. It appears as a thick band with a 360-degree twist that gives it a spiraling spinning effect. The twist signifies the intertwining or binding of the two souls in infinite motion with no beginning and no end. Together they are nurtured in the womb of creation, growing in love, filled with joy, and absolutely entangled as one.
Life is a journey…Creation is its purpose…and Joy is the seed
My connection with you brings joy, love, and peace. With you, I can imagine every possibility. We are Entangled…