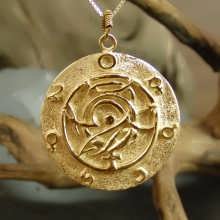 “IT IS FINISHED WHEN THE SEVEN ARE ONE”
Limited Edition! Will be assembled on August 7th between 5:30-6:35 GMT+3

The drawing for the Talisman comes out of a manuscript entitled “Paradoxa Emblemata”, which was written in the 18th century by the Christian mystic D.A. Freher (1649–1728) who was inspired by the work of the german mystic and theologian Jacob Böhme (1575 – 1624), in this case specifically the book entitled “De signatura rerum” (the signatures of all things) which is a book on magical natural philosophy and alchemy.

On the outer circle of the Talisman we see all the planetary glyphs individually and inside the inner circle they are all superimposed on one another, making an intricate and complex synergetic symbol of their combined forces.