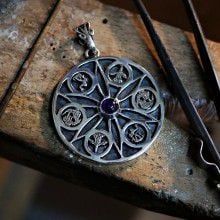 Symbol of Pisces. Set with an aquamarine.

Symbol light and the beginning of creation.

The main motif in this pendant is the Seed of Life - the seven intersecting circles.

The source of this structure are the two intersecting circles known as the Vesica Pisces - the symbol of light and the beginning of creation.

It is also a symbol of the Chaldean Order, which is the ancient traditional way of ordering the seven planets as seen from Earth (Saturn, Jupiter, Mars, the Sun, Venus, Mercury, and the Moon).

The pendant is set with an Aquamarine or Amethyst - the Pisces Birthstone.