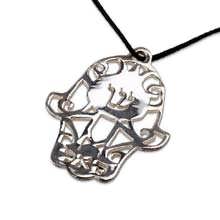 This Hamsa pendant contains the Hebrew letters "Samech", "Alef" and "Lamed" taken from the Sacred Hebrew 72 names of God - a combination used for Abundance.