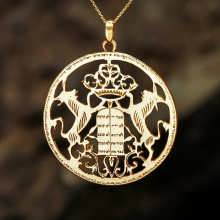 A Symbol of Unity with God

Find peace through oneness with God

What are the 72 names of g-d? In Judaism, g-d has no name because it is something beyond definition. The word ELOHIM (g-d) is made from the words: EL, ELA, and ELIM which means one (female), one (male) and many. The word YEHOVAH (also g-d) is made of the words HAYA, HOVE, YIHEYE which means what was, what is and what will be. This name comes to show us that our perception of the time as past, present, and future is elusive.

According to the Jewish tradition, there is a formula or a name that defines g-d in a total way. The name is made of 216 letters. The origin of the name is in Exodus 14:
“19 - And the angel of God, which went before the camp of Israel, removed and went behind them; and the pillar of the cloud went from before their face, and stood behind them:
20 - And it came between the camp of the Egyptians and the camp of Israel; and it was a cloud and darkness to them, but it gave light by night to these: so that the one came not near the other all the night.
21- And Moses stretched out his hand over the sea; and the LORD caused the sea to go back by a strong east wind all that night, and made the sea dry land, and the waters were divided.”

Dividing the 216 letters of the sentence (in Hebrew) to thirds will give us 72 combinations of 3 letters. There are many stories about Special Forces for the letters' combinations. In fact, in the Jewish tradition, there is no mention of any special forces for these names. Only the combination of all the 72 trios together in a very certain order will give us the secret. Apparently, it is a formula which is common to all things in existence.

In ancient times when the holy temple still existed, once a year and only on the holiest of days, Yom Kippur, The day of atonement, The great Cohen (High Priest)  dressed in white would enter the holy of holies, the inner sanctuary of the holy temple. The people waited outside the temple. This was the only time when the COHEN entered the Holy of Holies – The "Dvir" where inlaid the original Ark of the Covenant. '"Dvir" in Hebrew gematria equals 216. It is located above the drinking stone (EVEN HASHTIA). The word HASHTIA in Hebrew gematria is 720 meaning 72. The COHEN would say the 72 names of g-d in the specific formula passed from COHEN to COHEN only. If his heart was pure he would live, if his heart was not pure he would die. It said: “They would here the great name out of the great COHEN” and also “what marvelous sight was it to see the great COHEN go out of the holy of holies”.

The Pendant contains the Tablets of stone and around them the crown and lions as it appeared in ancient Jewish drawings. Engraved around the circle, is the full sentence from which the 72 names are composed (Exodus 14).