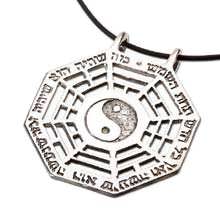 The I Ching, also known as the book of change, is one of the world's oldest books. The authors of this book examined the cyclical nature of the stars, the tides, the seasons and the natural world of animals and plants. At the same time, they explored the human world; which consists of family, politics, economics, love, war, and pride. They used 8 trigrams and 64 hexagrams (that appear in the pendant) to create a system that reveals the interactions between different life fields.

The I Ching is a tool to examine how a human being responds to the processes occurring in the universe. The I Ching gives us the ability to see data and reasons that are usually hidden from us.

Around the pendant is engraved in Hebrew:
“What was will be again, what happened will happen again. There's nothing new under the sun.”
The sentence is taken from the book Ecclesiastes written by King Solomon. King Solomon was aware of the cyclical nature of things and wrote this phrase with a Buddhist mindset. The I Ching, like King Solomon, shows us how small we are in relation to the processes occurring in the universe, however, at the same time it empowers us with knowledge so we can better understand our surroundings and our existence.

The I Ching pendant gives the wearer the understanding of the human place in the universe and the ability to attain great knowledge and power in life.