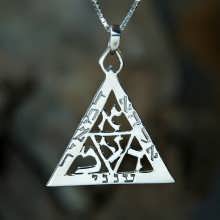 Reb Meir Ba'al Ha-Nes was one of the well known Tannaim that lived in Israel in Roman times. He was the student of Rabbi Akiva and is mentioned in many stories from the Gemara. He is associated with many miracles and that is the source for the name Ba'al Ha-Nes (possessor of the miracle, or miracle maker).

One of the well-known stories associated with him is about his sister in law that was captured by the Romans. Meir bribed the prison guard with a lot of money and told him to give half of it to anybody who wished to inform the Romans. The frightened guard then asked him, "what should I do when the money ends?" Rabbi Meir told him to say –" ELOHA DEMEIR ANENI" and subsequently, that’s how the guard was saved.

Another interesting story is about the writer known as Ka-Tzetnik who was held for two years in a Nazi concentration camp. In all his books appear the letters ALEF.DALET.MEM.AIN. When he was asked about these letters, he always refused to reveal their meaning. After his death, it was discovered that they are the initials of ELOHA DE MEIR ANENI which protected him and enabled him to survive the concentration camp.