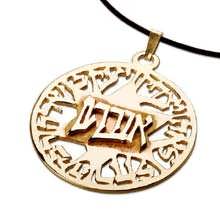 A Symbol of protection and belief in the cosmic plan

Experience protection and get insight to the cosmic plan

Judaism emphasizes the idea of a cosmic plan. This plan is outlined in the prophecies that were revealed to the patriarchs and the matriarchs. We can also see this in the fact that the name of the last forefather, the father of the twelve tribes, is Israel (formerly Jacob), which is an acronym made up of the first letter of each of the names of the fathers and mothers that preceded him.

The pendant points to the existence of a cosmic plan and one's belief in it.
The expression “protector of the fore-fathers” appears in many Jewish prayers and is one of G-D’s myriad names. one who perceives cosmic unity has a confidence that belies his understanding of his place in the larger plan.

The pendant symbolizes protection and one's belief in the cosmic plan.