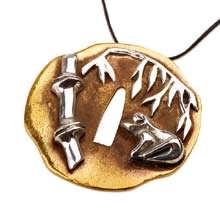 Great symbol of awaking and clear vision of reality

The Basho Tsuba
This Tsuba is dedicated to Basho - one of the greatest Haiku poets. He wrote his first poem at the age of 18 after a Zen teacher asked him about his state of consciousness. Basho’s answer to the question was “When a frog jumps to an ancient pool the sound of water is heard.”

Haiku poetry and the pendant symbolize clarity of though. The poetry is made up of several small vowels and lines and describes the moment that the poet experienced in a completely lucid manner and in direct truth, without the metaphors and laden imagery and figures of the western poetry. Haiku poetry is so clean that it allows us to sense that very moment frozen in time that is hidden in the poem, even if it was written hundreds of years ago.

The pendant is made of silver and brass.