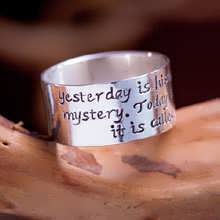 Yesterday Is History. Tomorrow is a mystery. Today is a gift, thats why it is called the present