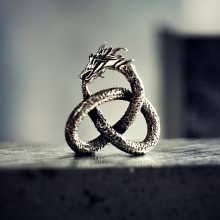 The Gordian knot can be made on a Torus tube which looks like a donut or a sphere that turns in from one side and comes out the other in a perpetual motion. The Torus Tube contains many mathematical formulas and equations. Science has begun using this model as a geometricmathematical model of the universe. Sacred geometry also makes extensive use of this shape.

The Gordian knot is associated in legend with Alexander the Great:
The knot was made by Gordias. It was further prophesied by an oracle that the one to untie the knot would become the king of Asia. In 333 BC, Alexander attempted to untie the knot. When he couldn't find any end to the knot, he proceeded to slice it in half with a stroke of his sword (the so-called "Alexandrian solution").