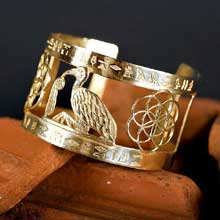 A Sacred Symbol of Ancient Knowledge and Wisdom

Connect to the hidden knowledge within you

"This, my children, your purpose in being; transmutation of darkness to light."
Emerald Tablet of Thoth

The translation of the hieroglyph engraved on the bracelet is "Oh my heart that I had in my days upon this earth, pray do not rise up to bear witness against me; pray do not accuse me before the great god".

The Emerald tablet jewel was inspired by "The Emerald Tablets of Thoth the Atlantean" that were written by Thoth. The seed of life that appears on the bracelet symbolizes the seven lords that dwell in the Halls of Amenti that Thoth refers to in the "Emerald Tablets".

The feather of Ma'at was a motif used in the legends of the Halls of Amenti, where the souls of the dead were brought to stand trial for their actions during their lifetime. In this trial, the heart of the deceased was weighed against the feather of Ma'at. If his heart was pure the scales were balanced.

Proof of Thoth's existence can be found in the Berlin museum, where there is an ancient papyrus describing how Pharaoh Hofu searched for "The ark of wisdom of Thoth". This is also a proof that Hofu was not as great a pyramid builder as most Egyptologists claim.

The emerald tablets were translated by Dr. M. Doreal and were published in the 1930's.