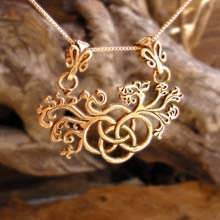 Strengthen the Earth Element in your life,find the connection to abundance life and fertility

Earth Element Pendant
The earth element represents qualities of stability, routine, security, abundance, fertility, and balance. The pendant carries a unique symbol, four circles that cross over one another and represent the third day of creation from the structure of the seed of life- this is the day the earth was created. The earth represents the solid, earthy ground and known to be related to the first Chakra. Among the five platonic solids, it is parallel to the cube. From an astrological point of view, earth is related to Taurus, Virgo and Capricorn.