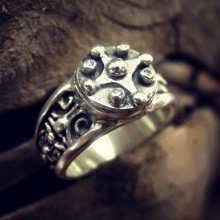 This Talisman was originally designed for the rare and sold out edition of the Venus Transit Talisman (from the 6th of June 2012). After many requests, our astrologer found a unique opportunity to recreate them as a powerful Venus - Jupiter Solar Talismans.
These limited special edition talismans were assembled on December 4th 2014 between 21:11-22:13 GMT+3

The symbol of Venus is set with diamonds which is the stone symbolizing the traits of Venus.