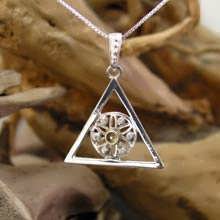 The Monad symbol in the middle (circle and dot) is made with gold - a symbol of the sun.