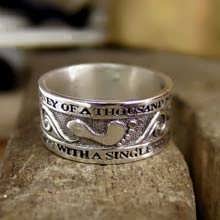 A journey of a thousand miles begins with a single step

The Journey of A Thousand Miles Ring

The ring is meant to encourage you - the wearer for willpower and determination and to experience effortless action (Wu Wei).

The Journey of A Thousand Miles ring is another collaboration with my young brother master engraver Jonathan. It is another homage to my favorite life-changing book and one of the best books ever written - the book of Tao, attributed to the Chinese philosopher Lao Tse. The Taoism is a philosophy based upon the understanding of the laws of the universe - the Yin and Yang. The balancing powers, existence and nothingness, the female and male. Taoism explains the effortless way of action called - Wu Wei.

The tao itself is an undefined term although verbally known as the way or the path. The use of the term always appears in some combination (the natural path for example) that is because of the undefinability of the term Tao. The Tao philosophy reminds us of Buddhism in which consciousness is also undefinable and reality is absent. Like Buddhism, the Taoism was also born out of retrospection of the natural process of the universe and deploying them on the way humans should act in order to achieve perfect balance and effortless action. The best way to try to define the Tao is to treat it as the principle of action from which all things are derived from - Yin and Yang, existence and nothingness.

The sentence on the ring states that “A journey of a thousand miles begins with a single step”.
This sentence emphasizes the fact that the seed contains the image of the tree. It is important to understand that the text does not encourage blind actions which may bring an unwanted outcome.
The meaning of this sentence is to promote effortless action (Wu Wei). Lao Tzu emphasizes the notion that, with willpower and determination our thoughts and actions eventually become one. Our life’s journey begins with a thought that leads us to an action, and like skilled musicians through years of experience, we combine them both into our own harmonious life.