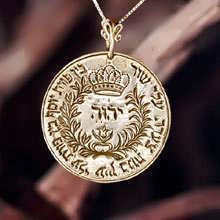 A couple of weeks ago a French customer of mine came to visit and brought with him an interesting amulet. He wanted to know what were the different engravings on both sides of the talisman. To my surprise, it was a genuine antique kabbalah talisman. On one side I've recognized secret angelic names that were used in such ancient talismans for protection. In the center, there were the three Hebrew letters that compose one of the names of God - Shaddai - initials for “Shomer Daltot Israel”- Guardian of the Doors of Israel.

On the other side appears an engraving of the “Ben Porat” blessing. The term Ben Porat Yosef is taken from Jacob’s blessing on his deathbed to his son Joseph. Before Jacob passed away he bestowed his blessing upon Joseph - it’s an ancient blessing for abundance, fertility, protection and strength. The Hebrew original words are “BEN PORAT YOSEF, BEN PORAT ALEY AIN, BANOT, ZAADA ALEY SHOR”. “BEN PORAT” means - a son of a fruitful tree, which is a symbol of abundance and fertility. “ALEY AIN” the tree is depicted as standing near a spring or a fountain - again a symbol of longevity and abundance. ”BANOT ZAADA ALEY SHOR” the tree’s branches are curved or becoming entangled on a wall - a symbol of strength and protection. The BEN PORAT blessing is also considered a powerful protection against Evil Eye since Joseph was protected and blessed against the people’s envy. At the center of the blessing, there were the four letters of the Tetragrammaton; One of the names of God (which is, by the way, a depiction of existence, time and space).

On the side of the pendant, there was an engraving of the entire 42 sacred names -The Ana B’koakh prayer - another secret formula for the name/definition of God which can be found in ancient amulets for healing and protection.

After I gave him a brief explanation about the meaning of the amulet he asked me if I could create a replica for him - I told him that I'll do it for free if he will let me use it as a model for my clients - he agreed so here it is - Enjoy.