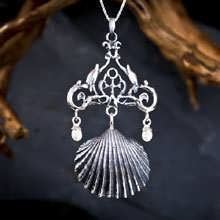 Venus is the universal symbol of fertility, beauty, relationships in general and intimacy in particular. Venus is the expression of our female aspect and creates compatibility, unity and compromise. She characterizes the urge for connection, for merging, cooperation and flow, for pleasantness, softness and joy. She is also connected to a well developed esthetic sense and artistic abilities.

The symbols decorated in the upper part of the Talisman are the astrological symbols of Taurus (beneath the bail) and Venus (in the middle), while the seashell below is one of the ancient symbols of Venus, which was mythologically born from the sea. There are also two pearls on both sides, which are traditionally ruled by the Moon and Venus