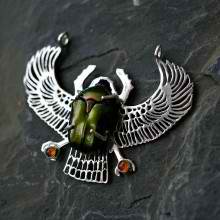 The pendant contains a real genuine shell scarab with its magnificent colors (don't worry! we didn't kill it - it lived its entire lifespan). The stones at the bottom are Carnelian.