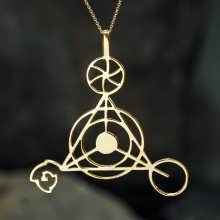 Reconnect with sacred geometry and the creative force within you

The shape of the personal creation pendant appeared in the year 1991 in Wessex, England, in a wheat field with a large diameter of a few hundred meters.

The geometrical shapes in the circles appear near the ancient structures of Stonehenge, Avebury and Salisbury Hill. These mystical sites were built as markers of heavenly bodies in ancient times. The pendant shape contains complex mathematical equations like the Fibonacci series, Pi value, the Seed of Life, the Flower of Life, the Fruit of Life and the Tree of Life, all of which are embodied in this cipher.

The Personal Creation pendant helps one to reconnect to the creative divine force within, and the cosmic language (sacred geometry).