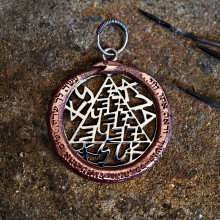 Ancient talisman of healing and transformation

Focus the wearer to the ability to heal and recreate oneself

The symbolism of the Copper Snake Talisman was derived from the ancient biblical story from the Book of Numbers. The story is about a copper serpent on a pole which was erected by Moses in order to protect and heal the Israelites from the deadly fiery serpents in the desert. The "fiery serpents" were sent by G-D to punish them for speaking against G-d and Moses.

An interesting interpretation claims that since the Israelites were protected by the divine force, their complaints against the journey and their longing to return to Egypt removed from them the divine spirit and exposed them to the reality of the nomadic life in the desert including all the dangers and difficulties.

The copper snake was called Nehushtan and it is derived from the Hebrew word for snake - Nahash and copper - Nehushet.

The symbol of the snake as a sign of eternity, divinity and healing is ancient and can be traced in the ancient cultures of the Middle East such as the Egyptian culture, the ancient Hindu religion and the ancient Greek religion. Ever since our ancestors saw how a snake sloughs off his skin and is being "born" again, it became a symbol of healing and eternal life. Another interesting reason for the snake being a symbol of healing is a process known as mithridatism which is the practice of an immunity against different types of venom or poison by gradually self-administering non-lethal amounts. This method was used by the ancient king of the Greek region of Pontus, king Mithridates who was so afraid of being poisoned that he gradually ingested small amounts of venom in order to develop immunity.

Copper snakes were used in the ancient regions of the Middle East as powerful talismans and I had the chance to view several copper snakes that were discovered near the ancient copper mines of Timna in a small temple for the Egyptian Goddess Hathor.

The copper snake in the pendant is actually the symbol of the Ouroboros - the serpent biting its own tail. The Ouroboros is the ultimate symbol of renewal, creativity and endless change. The Ouroboros symbol has accompanied me for many years and represents for me the courage to accept life-changing decisions.

The Ouroboros often represents self-reflexivity or cyclicality, especially in the sense of something constantly re-creating itself, the eternal return, and other processes perceived as cycles that begin anew as soon as they end. It can also represent the idea of unity. The Ouroboros has been important in religious and mythological symbolism but has also been frequently used in alchemical illustrations, where it symbolizes the circular nature of the alchemist's opus. On the cosmic level, it is the symbol of the universe itself that creates itself a new from itself, or as Stephen Hawking says - The force of gravity that allows, in fact, the universe to create itself a new infinitely.

The center of the pendant contains the powerful symbol of Tetraktys. It is a symbol used by the students of the mathematician Pythagoras that said that the whole universe is built on mathematical principles. This philosophy and this symbol appear in Judaism. The structure is made up of a triangle that is made up of ten points in ascending order from the apex. The structure represents the four elements of the ancient world – earth, air, fire and water.

The Tetraktys is parallel to the Kabbalistic tree of life structure of the Ten Sephirot of the and represents the space and the cosmic harmony.

If we take the name of G-D from the Torah YHWH that represents time - the fourth dimension (was, is and will be) and we will place it in the Tetraktis, then by summing up the numerical value of the letters, we receive the number 72, which means to say the 72 names of the Creator from which everything was created.

The fonts are the same ancient Hebrew letters that were used during the time of Moses. Outside the triangle appears the ancient prayer of Moses when his sister Miriam is stricken with leprosy. Moses prays a short but effective one-line healing prayer: אל נא רפא נא לה, el na, refa na la -- "please, God, heal her" the idea of the prayer and the Ouroboros was derived from the time that Moses saw the burning bush, while gazing at the vision he asked God for his name and the answer was "Ehyeh asher Ehyeh" - "I will be who I will be". When we use this short prayer to pray for healing, we implicitly call upon God Who is ever - changing. We call upon the God who is continually becoming, to heal and strengthen ourselves or our loved one who needs transformation and change.

The sentence on the copper snake itself was taken from the Book of numbers and it is the commandment of God for Moses to create the copper serpent " And the LORD said unto Moses, Make thee a fiery serpent, and set it upon a pole: and it shall come to pass, that every one that is bitten, when he looketh upon it, shall live"...