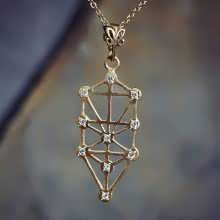 Sacred Geometry and Kabbalah Symbol of Unity and Divinity

Bring unity and divinity into your life

Tree of Life is one of the most recognized symbols of sacred geometry and Kabbalah. The Tree of Life like the Seed of Life can fit exactly in the centers of the circles of the Flower of Life

Kabbalah Tree of Life
The Tree of Life is explained in Sefer Yetzira ("Book of Creation"). It is a representation of the thirty-two paths comprised of the ten sefirot and the twenty-two (Hebrew alphabet letters) paths through which they run. The Tree of Life describes the descent of the divine into the manifest world and methods by which the divine unity may be attained in this life. It can be viewed as a map of the human psyche, and of the workings of creation, both manifest and not. It is important to realize that the pure nature of divinity is unity, and that the seemingly separate aspects of reality exists according to the Kabbalah in the human perception which perceives a dualistic reality after the cosmic event took place during creation which is known according to the Kabbalah as "Shevirat ha-Kelim- the breaking of the vessels". The Ten Sefirot were supposed to contain the divine infinite light but because of a cataclysmic event some were unable to contain this divine light and were shattered. The existence of these "broken vessels" created a dualistic perception of reality and creation and it affects even our daily human experience. Through spiritual work, the world should rise from the state of chaos through the process which is known as "Tikkun"-Rectification.

The 10 sefirot together with the 22 letters constitute the "32 paths of secret wisdom".

Tree of Life and Pythagoras
In the ancient Egyptian temple in Abydos, on one of the pillars, there is a perfect diagram of the Seed of Life and the Flower of life with some ancient Greek writings, which shows that it was probably made during the Hellenistic period by the Pythagoreans. These same principles and teachings can be found in the land of Israel in the early teachings of the Kabbalah who delved into the studies of another sacred pattern, hidden inside the Flower of Life - The tree of Life. The Kabbalists used this structure as a key that shows the flow of light and consciousness from the endless divine source. The Tree of Life also referred to as the structure of the different realms of reality.

The Tree of Life is used as a sign of unity and love.