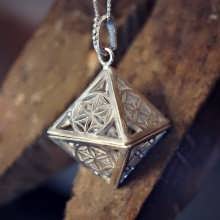 With Rough Diamond Inside. Carry your life’s Motto With you.

Charge your Motto, wish, idea, blessings or memory into the pendant and carry it close to your heart

The Time and Space Pendant - With Rough Diamond Inside

The pendant is an octahedron. It represents time and space because it is the basis for 3d space which we experience. It also represents the way the thought form, or as a matter of fact, any creative force takes form. On each facet, I've placed the center of the Seed of Life - the pattern of creation, while in the center there is a diamond in it's rough form which represents the way our basic ideas and thought pattern turns into a reality.

Each one of you can meditate, pray or use another method and "place" inside his wish, idea, or blessing and use it for himself or as a gift for his loved ones.

The Story Behind the Pendant:
A couple of days ago while working, I was listening to an online lecture, and as it came to its end, youtube's algorithm picked another one. It was about psychic abilities. The presenter claimed that he worked for the CIA over the past decades and provided many thrilling stories which I suppose might seem far-fetched to most of us. When the lecture was over, I looked at the comments section. As I suspected most of the people were skeptical about his claims for various reasons. But one of the commentators simply stated that if this guy is the genuine thing he could simply provide a shred of evidence on stage. He claimed that those psychic abilities or remote viewing occurred outside the realms of time and space.

Since I was working on a piece of jewelry that represents time and space, I immediately remembered an event that took place years ago. It happened in the late 90's. I attended a meditation with a group of friends and the one who hosted us and conducted the session asked us to close our eyes. Then he placed a small object in our hand and asked us to "sense" what it was. The next thing that happened was a blurred vision of something white and illuminating. As the vision cleared, I realized that it is snow. The next thing I "saw" were the footsteps of a fox running in the deep snow. As I "raised my eyes" from the snow I saw two people wearing dark robes with ornaments. They were walking in the snow near a large structure with these onion-shaped domes. I realized that these were Pravoslav priests. The building was a church or a monastery. It was Russia perhaps in the past, and I knew that the small object that was placed in the palm of my hand was a tiny piece of natural Alexandrite. A rare gemstone that was discovered in 1830 in Russia’s Ural Mountains and was named after Czar Alexander.

I find the idea that objects contain not just their physical attributes but also "memories" "knowledge" or information fascinating.

That is why I came up with this new design. The Time and Space pendant. What if one can take this pendant and "place" inside it a "purpose" or his own "motto" or even a memory?