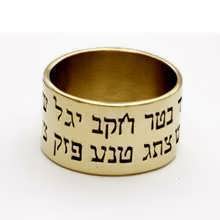 A Powerful Symbol of Protection, Courage, and Success

Conquer your fears, and lead a more successful life

David's related dream
The model was made after David had a dream. As David relates "In the dream, I was in a very dark place. I was tied up and could not move anything. I tried to scream but my voice was gone. It was very frightening. Then the Ana Becoach prayer rose up in my mind. I started saying it in my thoughts. When I reached the third line
everything disappeared and I woke up."