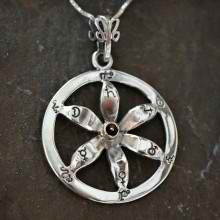 Limited Edition, Based on the Eastern Hyacinth Flower, Equinox, and Chaldean Order

Bring tremendous vitality, power, and motivation as well as calibrate with the cosmic order.

The center in this version is made of 14k Gold to strengthen the connection to the solar powers.

The Talisman is modeled after the eastern Hyacinth flower, which expresses the place of the Sun as the center of our solar system and the wandering (classical) planets as the flowering petals, stemming from it and revolving around it. The Planets are placed in the ‘Chaldean Order’, from the slower and furthest (Saturn) to the fastest and closest (Moon). On the outer circle are engraved magical Solar Sigils taken from Albertus Magnus (12th century) “Treatise of the 12 heavenly signs and their seals”.

Hyacinths were associated with rebirth and the Greek god Apollo (Sun-God). The Hyacinth flower was also used in the Persian New Year celebration (Norouz) held during the Spring Equinox.

The Talisman gives tremendous vitality, power, and motivation. They calibrate you to the cosmic order and help magnify one's expression to the world at large. The Talismans bring fresh new energy and creative powers, which can revive and heal the mind and body.