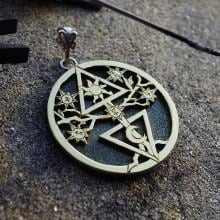 Connect with the beauty and meaning of Alchemy Symbolism

The symbols in the new Alchemical Cosmic Tree Pendant design are derived directly from the ancient teachings of Alchemy.

The two reversed triangles are a symbol of the "as above, so Below” - a concept that can be found in the alchemical ancient text of the Emerald Tablet. The idea that everything on earth is a projection of the heavenly forces that govern the universe. The same rotating particles of the atom, are subjected to the same physical laws that govern the galaxies.

The triangle is also an ancient symbol of creation and existence among others. The symbols of the Sun and the Moon are the symbols of the feminine and masculine forces of creation while the sun is also the ancient symbol of the eternal, the gold. The five symbols on each one of the planets are also the symbols of various metals that were the key to transmutation into gold. The numbers three and seven that can be found in the design (the triangles and the planets) are also repetitive key numbers in numerous spiritual and philosophical teachings. The tree is of course a symbol of life and creation.


About Alchemy
Many think of Alchemy as an ancient quest to transform metals into precious gold and obtain eternal life, but it is much more than that. The concept of Alchemy encapsulates the ancient beliefs and teaching of the ancient Egyptians, the Greek philosophers, the origins of chemistry, medicine, physics, and modern science.

During the Greek period, those concepts and this quest for eternity became also a quest to find the origins of existence, creation, and the cosmos. These concepts and the ancient knowledge found their way into Hermeticism - named after Hermes, the Greek version of the ancient Egyptian god of wisdom and knowledge -Thoth. The figure of Thoth/Hermes appears in an ancient mysterious and cryptic text, the Corpus Hermeticum as a teacher who discusses with his disciples the true origin of the cosmos, nature, the mind, the laws of creation and existence.
These texts are dated to the 2nd and 3r centuries AD in Egypt. These writings also became the origin of the ancient Hermetica, which became the foundation stone of Alchemy, along with the
mysterious text of the Emerald Tablet.

What the alchemists were trying to discover was the secret of the Prima Materia - the source of all creation and existence and the invisible force that sustains the universe. Another concept that they used was the Anima Mundi or the "World Soul". The one force/soul or cosmic awareness that binds everything and is everything. The ancient alchemists were trying to purify endless materials in order to find the "Philosopher's Stone" - the secret substance that is mentioned in the Corpus Hermeticum that possesses the power of transmutation of matter and therefore can turn lead into gold, and provide the key to immortality and rejuvenation.