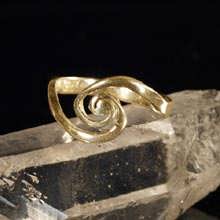 The Galaxy Ring
"The Moon The Sun And The Stars" in one ring!

Just to put things in perspective - M51 has a diameter of some 11.2 million light years with a mass equivalent to the mass of 160 million stars like our Sun…sounds huge, doesn’t it?

The spiral structure presents in graphic form one of the mathematical laws that are the basis of the Universe. The spiral formation can be found in countless examples within nature from the shape of the seeds in a Sunflower and a pine cone, in seashells, cacti and through to the structure of entire huge galaxies.

The spiral formation is based on two important mathematical laws:
• The Fibonacci number sequence - a mathematical series from which reality is constructed.
• The Golden Rule - the mathematical proportions that exist in nature that we see in things of beauty and harmony.

The ring was made at the request of a client. The thing I found compelling in the ring (and that was also my intention when I designed it) was the sense of proportion that one feels when he stands in front of something so huge. Suddenly, we begin to understand our place in the monumental formation that is the universe…