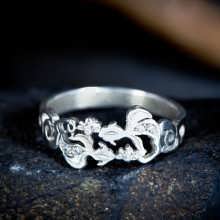 Water Element Ring
The water ring contains symbols of two fish and a water lily. The fish, like the water, symbolizes abundance and the lotus flower symbolizes spirituality. Water represents change, flow and adaptation. The water element represents the second Chakra. Among the five platonic solids, it is parallel to the Icosahedron. From an astrological point of view, water is related to Cancer, Scorpio and Pisces.

The idea behind the four elements project
The four rings were created to bring you a tool to enhance your life. Focus on the element that represents the things you are currently looking for in your life. That is the ring for you. It is possible to select the opposite element from your dominant element and in this way, achieve more balance.