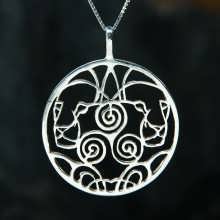 Empower women and mothers to connect with motherhood, wisdom, strength and compassion.

For me, the lioness has always been the ultimate symbol of motherhood. The devoted mother protecting her children, teaching and guiding them with infinite support and wisdom. A symbol of true strength and power.

At the top right there is one lioness figure that represents wisdom and compassion and the top left there is a second lioness figure - a symbol of strength and power. At the center of the pendant, there is the Tri Spiral, an ancient symbol of motherhood. Some claim that the Triple Spiral may represent the nine-month period of human pregnancy since the Sun takes one-fourth of a year (three months) to go from the equinox to extreme north or south (the solstice). During each of these three-month periods, the Sun appears to form a quasi-helical shape, which can be described as a spiral, so that three spirals could represent nine months of pregnancy. The Tri Spiral is also known to represent the triple Goddess which stand for the three periods in woman’s life -the maiden, the woman and the old and wise one.

The pendant is meant to empower women and mothers to connect with motherhood, wisdom, strength and compassion