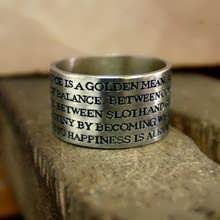 Based on ancient Greek philosopher Aristotle’s perception and ideas of what is happiness and how to achieve a state of complete happiness through balance as well aspiration for excellence.

constant reminder for the wearer to continuously act towards contemplating the way of excellence.

This ring is based on the ancient Greek philosopher Aristotle’s perception and ideas of what is happiness and how to achieve a state of complete happiness through balance as well as an aspiration for excellence.

The writing on the ring says:
”Excellence is a golden mean: A habit of good deeds and an art of balance. Between cowardice and rashness lies courage. Between sloth and greed lies ambition. Create your destiny by becoming what you repeatedly do. The path to happiness is already within you.”

The ring is a constant reminder for the wearer to continuously act towards contemplating the way of excellence.

Aristotle used philosophy as a tool aiding human life and human virtues. His perception was that happiness is won by excellence and it is an art mastered by training and habituation: We do not act rightly as we have virtue or excellence, but rather have these because we have acted rightly. “These virtues are formed in man by his doing the actions”; we are what we repeatedly do. Excellence then is not an act but a habit : “the good of man is a working of the soul in the way of excellence in a complete life... for as it is not one swallow or one fine day that makes a spring, so it is not one day or a short time that makes a man blessed and happy'"
Source: Will Durant, The Story of Philosophy: The Lives and Opinions of the World's Greatest Philosophers (1926)

Aristotle believed virtues led to happiness. The happiness that Aristotle spoke of, was not necessarily the same that we think of today. Today our view of happiness tends to be hedonic-to fulfill your desires and there is a direct link between happiness and the modern endless consumption of unnecessary things stuffed to us by a lubricated marketing machine. We want to feel good immediately and tend not to think too far ahead, so we perceive a night out or a pleasant activity as a route to happiness.

Aristotle in his known work “The Nicomachean Ethics”, considered one of the most important historical philosophical works, discussed his own perspective of happiness. Aristotle spoke about achieving eudaimonia, which can be roughly translated into happiness.
Eudaimonia is not an emotional state; it is more about being all that you can, fulfilling your potential. The idea is that by living in a way achieving your full potential, you bloom or flourish and so display the best version of you that you can be.

Aristotle thought that the practice of virtues would equate to happiness, in the sense of being all you could be. By virtues, Aristotle meant the act of achieving balance and moderation. There is a striking resemblance between his ideas and the Chinese ancient philosophy of the “WU WEI” the effortless flow achieved by endless practice until you and the action becomes one.
Aristotle referred the way to achieve happiness as a “golden mean” which is the balance between different attitudes.
For example, between cowardice and rashness, there is courage. Between sloth and greed, there is ambition. Between humility and pride, there is modesty; and between self-indulgence and insensibility, there is temperance.
Aristotle strongly disagreed with Socrates, according to whom knowledge automatically leads to the right action. Aristotle argued that the greatest misdeed was in spite of knowing the right course, failing to do it.
So for him, it was the act of living in balance and moderation that brought the highest pleasure. Not in the action itself, but it’s in the way of life. It is the way of life that would lead to the greatest long-term value rather than just a passing amusement. A modern illustration would be the difference between earning a high income, but spending it all and living in more moderation and having great wealth that will last you and provide security.

It was Aristotle’s belief that by achieving these virtues, happiness would result. So for him, contemplation was the highest activity humans could do. Contemplation is the activity that refines and discovers virtues. Carried out continuously it allows you to reach your potential.