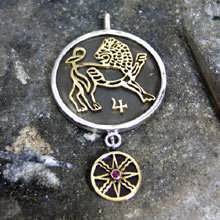 Limited edition! Assembled on July 25th 2014 between 5:46-6:35 +3 GMT. Jupiter Cazimi strongly magnifies Jupiter to kingly Heights with the extra power of the sun

Encourages a connection to ones own center, individuality, creativity and will power.

After spending a year In Its exaltation sign - Cancer, Jupiter finally moved into Leo (on 16th of July) and at the entrance, he is honored with the presence of his host - the Sun, which is returning to its celestial home and will embrace him in its belly. A Cazimi conjunction or “in the heart of the sun” is a time when a planet is exactly in 0.17 minutes of orb from the Sun. This Jupiter Cazimi strongly magnifies Jupiter to kingly Heights with the extra power of the sun, strongly dignified In its own solar home.

Jupiter and the sun are both ‘diurnal’ planets and are the primary rulers of the fire triplicity, Therefore both are considered very strong in fire signs. In Leo which is ruled by the Sun, Jupiter’s fiery solar side is strongly expressed, further amplified by the Cazimi, This Talisman gives a very strong energy of success, fame, charisma, publicity, and a radiating ‘royal’ presence!
It gives a true creative insight, expressive powers, heightened vitality, inner growth and expansion, joy and a strong feeling of well being. Finally, It encourages a connection to one's own center, individuality, creativity and willpower.

Jupiter has always been considered to be the ‘great benefactor’. It is the largest planet in our solar system and presides over the principles of expansion growth and synthesis. Jupiter brings us the gifts of abundance and success and provides us with spiritual guidance, support and protection.

Jupiter is also the planet that influences the higher faculties of the mind, our ability to synthesize and to have a deep understanding of concepts and experiences.
Because of this, Jupiter rules philosophy, religion (in the open and liberal sense) and spiritual insight. Jupiter also controls moral ethics and justice and our inherent capability to discern between good and bad. People who were born when Jupiter was strong, are always seeking truth, justice and faith in life. They are teachers, visionaries and word spreaders.
In Indian astrology, the name for Jupiter is 'guru' which means guide or teacher. Jupiter is a guide for wisdom and expansion of consciousness, it lifts our spirit with joy, enthusiasm and optimism gives us a feeling of the magic in life and the gentle guiding hand of fate. Most important, Jupiter's influence helps us trust in our path and above all have hope!

The magus Cornelius Agrippa writes on talismans for Jupiter:
“...From the operations of Jupiter, they made for prolongation of life...increaseth felicity, riches, honor and conferreth benevolence and prosperity, and frees from enemies, gives a religious and glorious life and advancement of fortune.”

The Sun is the center of the solar system and it is the life giver and power source of this physical existence. The Sun symbol is the ultimate symbol of the Greek 'NOUS' or mind/spirit which is the driving force of the soul.

In each living being the Sun represents the core underlying energy around which all of the personality traits, needs, passions, and experiences revolve. The Sun animates our being in the physical world, the more we connect to our Sun and its powers, the more fulfilled we feel, and the more we actualize our soul through the mind/spirit intent.

The symbol at the bottom is the ancient Mesopotamian symbol of the Sun or the Sun god Shamash. The Ruby is considered in ancient traditions as the stone that symbolizes the Sun, life and strength.