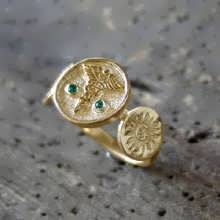 The talisman is made ('born') under specific astrological times.

About the Assembly time:
Created under the very powerful planetary configuration that took place on March 28th - which featured 5 planets in their ‘essential dignities' at the same time: The spring Sun was Exalted in Aries. Mars, the ruler of Aries, was Exalted in Capricorn (close to its exaltation degree). Saturn had just entered its own sign of Aquarius (its preferred sign according to the Tradition). Venus was in her own sign of Taurus, closely conjoined by the Moon which is Exalted there (to which we had dedicated a number of Talismans for Venus).

We have made these Talismans when the Exalted Sun was rising and when it was culminating, capturing the whole sky through the vantage point of the powerful spring Sun, sitting at the throne of increasing power and vitality, radiating its light to the other planetary bodies.

The Talisman:
This Talisman combines the metals ruled by the two lights: Gold - Sun, Silver - Moon. It includes their ancient astrological glyphs and is created under specific astrological times to draw out, intensify, reinforce and bring to life those symbols. The Lights are “wedded” by Mercury the androgynous universal spirit that is in charge of mediating these polarities (symbolized by his Astrological glyph together with the symbol of the caduceus).

This event is such a time, It features both lights in their exalted positions. Strongly Highlighting both sides of our soul and human experience. Offering the opportunity to balance these opposites of our nature and 'alchemize' them together.

This Talisman is intended to enhance the “marriage” of both principal energies, strong in themselves but ultimately the strongest when united. This is portrayed by the alchemical interweaving of these opposing forces by the Mercurial element (represented by mercury’s glyph and the winged caduceus) uniting body and soul, feminine and masculine, initiating the Androgyny, or the state of unified duality, which is the culmination of the alchemist's Great Work, producing the alchemical tincture/philosopher's stone.
The marriage of the Sun and the Moon causes the emergence of our most pure, androgynous essential self, and acts to transform the raw and chaotic and polarized material - attached self (Prima Materia) into gold (spirit) by way of purification and unification of our basic elements.