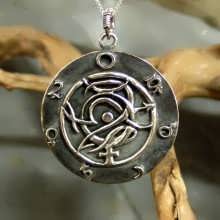 Limited Edition Will be Assembled on June 24th 2022.

On June 24th, as the Moon will align even more with the ecliptic, and stand between Venus and Mars while in its own exaltation sign of Taurus, we will be remaking our Seven Become One Talismans.

On the outer circle of the Talisman, we see all the planetary glyphs individually and inside the inner circle, they are all superimposed on one another, making an intricate and complex synergetic symbol of their combined forces.


Hermetic, platonic and neo-platonic cosmological models all start with the One and undivided ultimate existence which gradually emanates into different generative principles, in different levels of being. The One is considered the source of all there is, to which all must return.