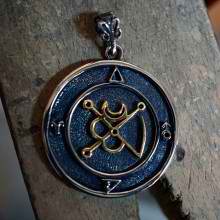 Limited Edition. assembled on the 3rd of January 2019. A Talisman for new beginnings, and rekindling the inner fire.

A very fruitful month for astral magic, as many planets are moving through their own celestial signs. Saturn in Capricorn, Jupiter in Sagittarius and now Mars in Aries.

This new Talisman for Mars was created a day after his ingress, when Mars was rising in Aries (on the ascendant) and the Moon was conjunct Jupiter in Sagittarius, which is harmoniously aspecting it (trine by sign) the Moon still carrying the martial virtues from their earlier encounter (the exact trine) applying them to be positively charged, expended and expressed with Jupiter’s beneficial gifts and powers (see below in Jupiter Sagittarius talisman)
.
Mars is in its own planetary Face or Decan, and in its own Dodecatemoria (the division of a sign into twelve segments) and also rules the Midheaven by exaltation (Capricorn) and also in mutual reception with the Sun by exaltation (Sun and Mars are each in the other's exaltation sign).