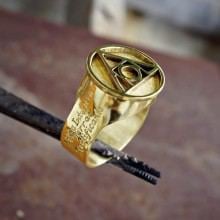 A powerful symbol of the eternal forces of the cosmos

The Philosopher's Stone Ring is a powerful symbol of the eternal forces of the cosmos, the elusive substance behind reality and matter and the ancient philosophical concepts of transmutation.

The ancient quest for immortality and ultimate knowledge
Though many were attracted to the idea of physical transmutation of various metals to gold in order to gain power and wealth, the origins of Alchemy can be traced to philosophical and religious concepts of the ancient Egyptians and the Greek philosophers. Alchemy is also the basis for modern physics, science, chemistry, and medicine. It was the developments of various concepts and the endless experimentation with various substances in the ancient labs of the alchemists that slowly and surely created modern science while trying to discover the secret of the Prima Materia - the source of all creation and existence and the invisible force that sustains the universe.

Another concept that they used was the Anima Mundi or the "World Soul". The one force/soul or cosmic awareness that binds everything and is everything. The ancient alchemists were trying to purify endless materials in order to find the "Philosopher's Stone" - the secret substance that is mentioned in the Corpus Hermeticum that possesses the power of transmutation of matter and therefore can turn lead into gold, and provide the key to immortality and rejuvenation.

Ring Elements
The symbol on top of the ring is the ancient symbol of Alchemy which is a combination of the symbols of the four classical elements – earth, water, air and fire.

The engraving in Latin on the sides of the ring says “Visita Interiora Terrae Rectificando Invenies Occultum Occultum Lapidem,” “Visit the interior of the earth and rectifying (purifying) you will find the hidden stone.” The motto originated in L’Azoth des Philosophes by the 15th Century alchemist Basilius Valentinus.

During the Greek period, those concepts and this quest for eternity became also a quest to find the origins of existence, creation, and the cosmos. These concepts and the ancient knowledge found their way into Hermeticism - named after Hermes, the Greek version of the ancient Egyptian god of wisdom and knowledge -Thoth. The figure of Thoth/Hermes appears in an ancient mysterious and cryptic text, the Corpus Hermeticum as a teacher who discusses with his disciples the true origin of the cosmos, nature, the mind, the laws of creation and existence.
These texts are dated to the 2nd and 3r centuries AD in Egypt. These writings also became the origin of the ancient Hermetica, which became the foundation stone of Alchemy, along with the mysterious text of the Emerald Tablet.

The Emerald Tablet of Hermes Trismegistus (Hermes/Mercury) is one of the most mysterious, cryptic and enigmatic texts. The text is actually derived from the Hermetic tradition - an ancient Greek and Egyptian philosophical text which are attributed to the mysterious figure known as Hermes Trismegistus. The texts are a combination of the Egyptian god of wisdom, Thoth and the Greek god Hermes. In these texts, Hermes discusses with his disciples, the true nature of the cosmos, nature, the mind etc. These teachings can be found in the ancient texts of the Corpus Hermeticum.

The Emerald Tablet is the most famous piece of Hermetica and is said to contain the secret of the Prima Materia - the base of all matter and existence which is formless and beyond definition (that is the reason for the endless similes in the Alchemical language).

Over the years and upon contemplating the words of this text, one can actually discover the many layers and hidden meanings of these words of wisdom. The text speaks volumes of ancient Taoism and different concepts of Buddhism. It was none other than Sir Isaac Newton, one of the greatest and most influential scientists in human history who claimed that many of his ideas came from the Corpus Hermeticum and the Emerald Tablet (which he translated).