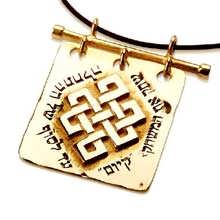 A Sacred Symbol of Change

"Play the game EXISTENCE until the end of the beginning!"

The symbol in the middle of the pendant is called the Tibetan knot (Srivatsa or the endless knot) and is one of the eight symbols of the Tibetan Buddhism. The Tibetan knot can stand for karmic consequences: pull here, something happens over there. It is an apt symbol for the Vajrayana methods: Often when we tug at one part of a knot while trying to loosen it, another part gets tighter. You have to work with the knot to get it to come undone. In its endless configuration, it evokes the cyclic nature of rebirth and also calls karmic connections to mind.

Around the pendant engraved in Hebrew is the sentence: "Play the game EXISTENCE until the end of the beginning" taken from Lennon's song "Tomorrow never knows", a song that was written after reading the "Tibetan Book of the Dead". The sentence comes to describe our identification with our "real self" that causes our suffering.

The Tibetan knot pendant helps the wearer to realize the natural rule of cause and effect.