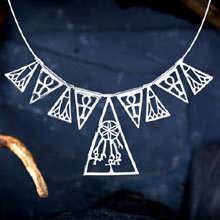 Learn to acknowledge and appreciate the eternity of your soul

Please note:
The length of the silver cable is 19.7" / 50 cm. If you wish to have it made specifically for you in a different length, please let us know (reply to the order confirmation with your request).