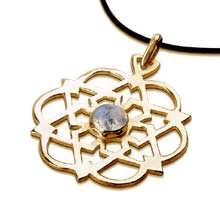 A Symbol of Health, Fertility, and Balance

Fill your life with self-balance, good health, and fertility

The inlaid Egg of life pendant is a two-dimensional version of the shape called the Egg of Life. The shape is composed of eight spheres. If we were to draw a line between the centers, we would get a three-dimensional Star of David.

The Egg of Life shape is the shape of the multi-cellular embryo in its first hours.

The Egg of Life shape is the second stage of a structure known as the Seed of Life, before the flower of life stage. These shapes contain the mathematical/geometrical base of the creation. The Egg of life includes the whole musical world within it because the length between the spheres gives us the basic musical scale of a tone and half a tone.