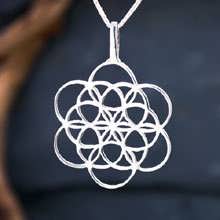 A Symbol of Health, Fertility, and Balance

Find balance health and fertility. Reveal the secret of music