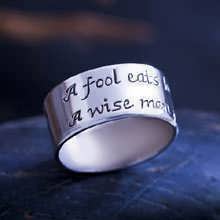 Symbol of patience and overcoming fears

A talisman ring to support us at days of crisis


"A fool eats his last potato. A wise man plants it."

This saying originated in the time of the potato famine in Ireland and symbolizes how patience and perseverance over desires and fears bring successful results. This saying is especially true in this time of economic crisis where a large part of the cause is due to fear.