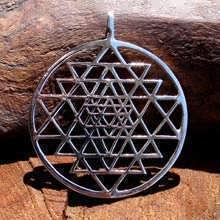 Hindu Vedic Symbol for harmony between the masculine and feminine

Bring balance, beauty and harmony to your life